New research from Vanson Bourne on the state of mid-market cybersecurity reveals major gaps between perception and reality of cybersecurity challenges. While mid-market enterprises expressed confidence in their cybersecurity defences, in reality, they struggled to defend against malicious activity that has become more sophisticated, targeted and severe.

IT decision makers of mid-market organisations in the US said that they were confident their organisation’s perimeter and endpoint security products can combat all cybersecurity threats. 90 percent of them also have dedicated IT staff focussing on security, further boosting the confidence that their cybersecurity posture is above average or great.

The findings revealed a cybersecurity dissonance among mid-market enterprises, highlighting a disparity between perception and reality. Key findings demonstrated that:

Many small and mid-market enterprises have a false sense of security arising from the belief that their size makes them less attractive targets to cyber threats such as hackers, viruses, malware, and cybersecurity breaches. But in reality, almost two-thirds of all targeted attacks hit small and medium size businesses. Typically, small business security is easier to bypass, staff less educated on hacking and social engineering, and the overall risk is much lower. Small companies are increasingly targeted as a backdoor into companies with more robust systems.

The disparity was also reinforced by 50 percent of respondents indicating that in the absence of dedicated personnel for day-to-day security operations, security alerts were investigated by IT/security staff when they had time. 77 percent of security alerts are investigated after more than one hour – a dangerous practice since every passing minute makes a security breach harder to contain and recover from. 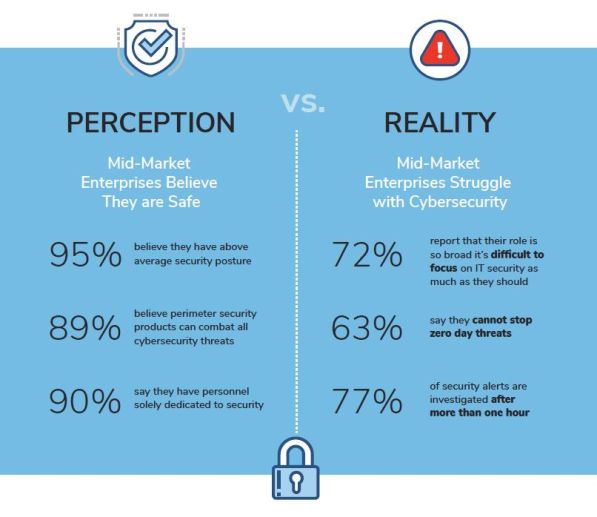 Mid-market enterprises face the same cybersecurity issues as large enterprises with only a fraction of the budget and less-skilled personnel. Almost 50 percent of the respondents said that security is so complex, they don’t know where to start to improve their organization’s security posture. The security needs of modern businesses have grown beyond their ability to cope efficiently.

To combat the ever changing threat landscape, many organisations today outsource at least part of their security management whether that be through anti-virus software or firewalls. SECurity as a Service (SECaaS) is a growing market that is set to be worth $US8.52b by 2020. The ‘as-a-service’ model can mitigate the need for capital investment and dedicated specialist resources, offer easy scalability and agility and in many cases, be a more cost effective solution than managing your security requirements in-house.

If you have concerns about your security posture, or would like to learn more about SECaaS, contact the blueAPACHE team.